To investigate the structural and functional characteristics and change of the retinal nerve fiber layer cleavages (RNFLCs) in glaucoma patients and suspects in long-term follow-up.

This is a retrospective longitudinal study. Within 43 eyes of 30 subjects, 62 RNFLC locations were detected on color fundus photography. Basic ophthalmic examinations, color fundus photography, optical coherence tomography (OCT), and visual field (VF) test were performed in 6-month intervals. Clinical characteristics and the structural and functional changes of the cleaved areas were analyzed.

RNFLC and localized vitreoretinal traction occurred most commonly along the superotemporal retinal vessel arcade. Nine locations had corresponding defects on OCT deviation map, while 31 locations were associated with defects on OCT deviation map. Three locations had corresponding VF defects. More of the non-highly myopic eyes had lamellar hole than the highly myopes (p = 0.038). The RNFLC lesions in glaucomatous eyes were more frequently associated with OCT defects on deviation map (p = 0.021). There was no difference in the presence of lamellar hole or the number of RNFLCs between the glaucomatous and non-glaucomatous eyes. During a 66.8 ± 37.8-month follow-up, there was no structural or functional progression of the RNFLCs as determined by color fundus photography, VF test, and GPA of OCT interpreted by three ophthalmologists. There was no statistically significant change of RNFLC area (p = 0.268).

RNFLC did not show detectable functional or structural change in early glaucoma patients and suspects after long-term follow-up. 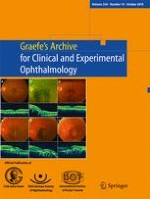 Commentary on “Intraocular Pressure After LASEK”

Comparison of the horizontal diameter to a modeled area of traction in eyes with vitreomacular traction: is the diameter close enough to the truth?