Health-related quality of life (HRQL) has been studied extensively during the first year following esophagectomy, but little is known about HRQL in long-term survivors. The aim of this study was to investigate HRQL in patients alive at least 1 year after surgical resection for esophageal cancer using validated European Organisation for Research and Treatment of Cancer (EORTC) quality of life (QOL) questionnaires (QLQ). 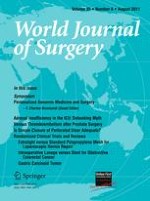 Overview of the Development of Personalized Genomic Medicine and Surgery