Bariatric surgery has been shown to improve and resolve diabetes. However, limited literature about its impact on end-organ complications of diabetes is available. The aim of this study was to examine the long-term effect of bariatric surgery on albuminuria.

We studied 101 patients with pre-operative diabetes and albuminuria [defined as urine albumin:creatinine ratio (uACR) > 30 mg/g] who underwent bariatric surgery at an academic center from 2005 to 2014. 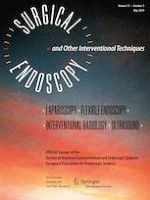 Does rating with a checklist improve the effect of E-learning for cognitive and practical skills in bariatric surgery? A rater-blinded, randomized-controlled trial

Comparison of postoperative pain at umbilical wound after conventional laparoscopic cholecystectomy between transumbilical and infraumbilical incisions: a randomized control trial

One or two trainees per workplace for laparoscopic surgery training courses: results from a randomized controlled trial