Lifestyle management through patient education plays a crucial role in prevention and care of diabetes. It is well established that lifestyle interventions, including diet and/or exercise, can prevent type 2 diabetes [ 1– 6] as well as ameliorate glycaemia and other risk factors for complications [ 7– 12] in patients with established diabetes. Recent reports of two studies that examined the effect of a lifestyle intervention on individuals with impaired glucose tolerance (IGT) over a long-term follow-up period (the China Da Qing Diabetes Prevention Study [ 13] and the Finnish Diabetes Prevention Study [ 14]), failed to show significant effects on cardiovascular disease (CVD) events or mortality. However, it is not known whether an intervention mainly focusing on lifestyle modification through patient education could prevent the occurrence of complications in patients with established diabetes, although there have been a few studies [ 15, 16] on lifestyle modification in combination with pharmacotherapy for hyperglycaemia, hypertension and dyslipidaemia in patients with type 2 diabetes.
The Japan Diabetes Complications Study (JDCS), a nationwide randomised controlled study of Japanese patients with type 2 diabetes, was designed to clarify whether a long-term therapeutic intervention mainly focused on lifestyle education has an effect on the incidence of diabetic macro- and microvascular complication events in patients with established type 2 diabetes (see Electronic supplementary material for members of JDCS). Another aim of this study was to clarify pathophysiological characteristics in East Asian patients with type 2 diabetes [ 17– 20]. We previously published a 3 year interim report [ 21] showing significant but only limited improvement in glycaemia and no improvement in body weight, BP and serum lipids as a result of lifestyle modifications in patients with type 2 diabetes. This result was quite consistent with other subsequent studies with similar observation periods [ 8, 11, 22, 23]. The present report shows results after 8 years of an investigation that focused on the incidence of macro- and microvascular complications of diabetes.
Anzeige

Clinical variables and their changes
Clinical characteristics of the patients at baseline and at the fourth and eighth year after the start of the study are shown in Table  1. There were no differences in most variables between the two groups except for the triacylglycerol level, which was slightly but significantly lower in the INT group at the eighth year. Proportions of patients using agents for hyperglycaemia, including insulin, hypertension and dyslipidaemia and anti-platelet agents did not differ significantly between groups. Frequency of clinic visits also did not differ between groups. Proportions of patients who satisfied all or each of the components of the therapeutic goals did not differ between groups at either the fourth or eighth year. Median follow-up time was 7.8 years.
Table 1
Patient characteristics at baseline and 4 and 8 years after start of the intervention in each group
Means ± SD, unless otherwise stated
aMedian (interquartile range)
b p values CON vs INT groups (Fisher’s exact test for therapeutic measures, Mantel’s test for smoking status and alcohol intake and Wilcoxon’s rank sum test for other variables)
c‘One drink’ is equivalent to 12.6 g of ethanol based on the US Department of Agriculture definition
dAfter 5 years
ND, not done
Of the eligible patients, 73% were followed into the eighth year. The dropout rate, which was defined as the proportion of patients who were lost-to-follow up until the eighth year, in the INT group (24%) was significantly lower than in the CON group (31%). Significant differences in baseline characteristics between patients who completed (i.e. were followed until the end of the observation period) and did not complete (i.e. dropped out during the observation period) follow-up were only found in the proportion of patients on insulin (22% completed vs 18% did not complete, p = 0.03), in current smokers (20% completed vs 7.5% did not complete, p = 0.01) and amount of daily exercise (590 kJ/day completed vs 351 kJ/day did not complete, p < 0.0001).
Effects of lifestyle modification
There were no differences in energy or fat intake between groups in either the fifth or the eighth year of the study (Table  1). Physical activity as determined by the Baecke’s Total Physical Activity Index [ 27] after 5 years of intervention was significantly higher in the INT group than in the CON group, with the difference in the total score being derived from the Sports Index (4.1 in the INT group vs 3.7 in the CON group, p = 0.028), but not Work or Leisure Indices. The proportion of current smokers in both groups decreased from 28% to 23%, with no significance between groups.
Anzeige
Primary endpoint analysis
During the study period, 345 retinopathy, 74 nephropathy, 115 CHD and 90 stroke events occurred. Among all CHD events, 60% ( n = 69) were angina pectoris and 40% ( n = 46) were myocardial infarction, and among all stroke events, 83% ( n = 75) were brain infarction, 9% ( n = 8) were brain haemorrhage and 8% ( n = 7) were transient ischaemic attack. Kaplan–Meier curves for macro- and microvascular endpoints are shown in Fig.  2, which demonstrates that the incidence of stroke in the INT group was significantly lower than that in the CON group.
×
Risk factors for stroke analysed by univariate and multivariate Cox proportional hazard models are shown in Table  2, and belonging to the INT group was associated with an approximately 40% significant risk reduction for stroke by both univariate and multivariate analyses when all significant variables determined by univariate analysis were included. Systolic BP and lipoprotein(a) were also significant factors that remained in multivariate analysis. Despite this, absolute values for BP and lipoprotein(a) did not differ significantly between groups. Even when myocardial infarction (including asymptomatic) or brain infarction was used as an endpoint instead of CHD or stroke, respectively, the above results were not changed (data not shown).
Table 2
Risk factors for stroke analysed by Cox univariate and multivariate models
All significant variables selected for the univariate analysis with the criterion of a p < 0.1 were used in the multivariate analysis
No group differences were found in the occurrence of CHD, development of retinopathy (35.7/1,000 patient-years in the CON group vs 39.0 in the INT group), progression of retinopathy (6.5/1,000 patient-years in the CON group vs 10.0 in the INT group) or development of nephropathy (6.7/1,000 patient-years in the CON group vs 6.7 in the INT group).

We thank the many diabetologists and patients at 59 participating institutes all over Japan. Thanks are extended to Y. Maruyama for her excellent secretarial assistance. This study was financially supported by the Ministry of Health, Labour and Welfare, Japan. The sponsor had no role in the design and conduct of the study. 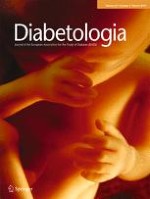 Regulation of oxidative stress by glycaemic control: evidence for an independent inhibitory effect of insulin therapy