Few studies have been conducted on the long-term prognosis of patients with amyloid light chain (AL) and amyloid A (AA) renal amyloidosis in the same cohort.

We retrospectively examined 68 patients with biopsy-proven renal amyloidosis (38 AL and 30 AA). Clinicopathological findings at the diagnosis and follow-up data were evaluated in each patient. We analyzed the relationship between clinicopathological parameters and survival data. 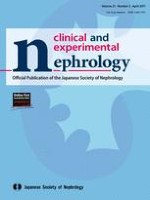 Mutation profile and treatment of Gitelman syndrome in Chinese patients