Graft failure following anterior cruciate ligament reconstruction (ACLR) is a devastating injury among patients returning to activity. The goals of this study were to define the long-term rate of graft failure after ACLR in the general population and evaluate factors associated with graft failure.

This long-term observational study included a population-based incidence cohort of patients who underwent primary ACLR after diagnosis with new-onset, isolated ACL tears between 1990 and 2010. For all patients, a chart review was performed to collect information related to the initial injury, treatment, and outcomes. Patients were retrospectively followed to determine the incidence of graft failure following ACLR.

Among all patients receiving primary ACLR, graft failure remains an uncommon but functionally devastating outcome with an estimated graft survival rate of 91 % at 25 years following surgery. Patients aged 22 or younger had a significantly higher rate of graft failure than older patients. The rate of graft failure decreased over the 21-year span of this study. 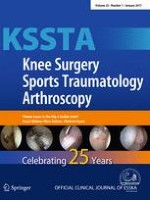 Comparison of outcomes after UKA in patients with and without chondrocalcinosis: a matched cohort study