Due to its industrial application and frequent use as a coating material for food containers, bisphenol A (4,4′-isopropylidenediphenol, BPA) is present in abundance in our environment. Data on intake levels of BPA are limited in preadolescent children in Japan. This study was designed to help us better understand the current state of BPA exposure in children in Japan.

We followed first graders (n = 104) attending school in a Tokyo suburb from 1998 until the sixth grade (2003), during which time we collected a total of three morning urine samples. Urinary BPA was analyzed using high-performance liquid chromatography isotope-dilution tandem mass spectrometry.

Urinary levels of BPA were relatively low throughout the study period; however, as the study progressed, we observed a significant decline in levels, the reason behind which is not yet clear. 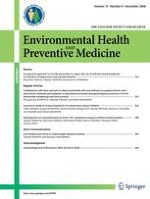 A proposed approach to suicide prevention in Japan: the use of self-perceived symptoms as indicators of depression and suicidal ideation

Acknowledgment of reviewers who served in 2008