Allogeneic hematopoietic stem cell transplantation (SCT) is a potentially curative approach in patients with acute myeloid leukemia (AML). Substantial improvement has been achieved in the last decades in SCT outcomes owing to improved supportive care and transplantation techniques and a larger proportion of SCT recipients are becoming long-term survivors [ 1].
Reduced-intensity conditioning (RIC) has been widely introduced over the past 15 years to allow SCT in elderly and medically infirm patients not eligible for standard myeloablative conditioning (MAC) [ 2]. Several studies have shown similar survival of AML patients after SCT with RIC or MAC [ 3– 9]. Most of these studies have shown that RIC is associated with reduced non-relapse mortality (NRM) but increased relapse rate, resulting in a similar leukemia-free survival (LFS) as MAC. However, due to the more recent introduction of RIC, there is paucity of data on the long-term outcome (beyond 10 years) after RIC.
Anzeige
Most deaths after SCT occur within the first 2 years [ 10]. Long-term survivors remain at increased risk for late complications and late morbidity and mortality that is higher than their sibling donors or the age- and gender-matched general population [ 11– 13]. In the largest study of long-term survivors, the Center of International Blood and Marrow Transplantation Research (CIBMTR) has shown that the probability of patients who were alive and disease-free at 2 years after SCT to remain alive 10 years after SCT was 85 % (84 % among patients with AML) [ 13]. Relapse was the most common cause of late death, but chronic graft-versus-host disease (GVHD), infections, organ toxicity and second cancers were also important causes of late mortality. These observations were limited to MAC recipients, and there is, similarly, paucity of data on the kinetics of late events after RIC and the expected outcomes of 2-year survivors after RIC.
In this study, we show that 10-year survival is similar after RIC and MAC, and that 2-year survivors after RIC can expect a similarly favorable outcome as 2-year survivors after MAC.

This is a retrospective multicenter analysis. Data were provided and approved for this study by the acute leukemia working party (ALWP) of the European Group for Blood and Marrow Transplantation (EBMT). Eligibility criteria included age ≥50 years, de novo AML in any disease status at SCT, transplants from HLA-compatible sibling donors between 1997 and 2005 with bone marrow (BM) or granulocyte colony-stimulating factor (G-CSF)-mobilized peripheral blood stem cells (PBSC) after MAC or RIC. Patients given unrelated or alternative donor grafts were not included. Variables collected included recipient and donor characteristics, disease features, transplant related factors including drugs and total doses used in the conditioning regimen, and outcome variables.

The conditioning regimen was selected according to the participating center discretion. Dose intensity was defined according to EBMT criteria based on the reversibility and expected duration of cytopenia after SCT [ 3]. MAC consisted of high-dose cyclophosphamide and high-dose busulfan (BuCy) or total body irradiation (TBI). Reduced-toxicity myeloablative regimens consisted of a combination of fludarabine and myeloablative dose of an alkylating agent (such as intravenous busulfan at a total dose ≥9.6 mg/kg, melphalan >140 mg/m 2, treosulfan ≥ 36 g/m 2) were included with MAC. RIC consisted of fludarabine combined with reduced dose alkylating agent (such as busulfan < 9.6 mg/kg) or low-dose TBI (<8 Gy). GVHD prophylaxis consisted of cyclosporine A and a short course of methotrexate in most patients. In vivo T cell depletion with anti-thymocyte globulin (ATG) or alemtuzumab was allowed according to the participating center policy.
Anzeige

Disease relapse was defined according to standard hematological criteria. NRM was defined as death of any cause in the absence of prior disease recurrence. LFS was defined as survival without relapse. Overall survival (OS) was calculated from the day of SCT until death of any cause or last follow-up. GVHD-free relapse-free survival (GRFS) was defined by the first of the following event: acute GVHD grades III-IV, extensive chronic GVHD, relapse or death [ 14]. Patients with no event were censored at last contact. The cause of death was categorized according to standard criteria. The cause of death of patients who experienced relapsed disease at any time prior to death was considered relapse-related. Death in patients with active GVHD was defined as GVHD-related even if directly related to other cause.

The primary end point of the study was 10-year LFS. Secondary endpoints included NRM, relapse incidence (RI), OS, acute and chronic GVHD, and GRFS. Cumulative incidence functions (CIF) were used to estimate RI and NRM in a competing risks setting, with death and relapse considered as competing events with each other [ 15]. In the analysis of chronic GVHD, relapse and death were considered to be competing events. The probabilities of LFS, OS, and GRFS were calculated using the Kaplan–Meier estimates. The two regimen intensity groups were compared by the chi-square method for qualitative variables, and Mann–Whitney test for continuous parameters. Log-rank test was used for examining the difference in survivor curves for LFS, OS, and GRFS. Gray test was uses to analyze the difference in cumulative incidence curves for RI and NRM. The variables considered were patient age at transplantation, recipient gender, female donor to male recipient, cytogenetics risk group, status at transplantation (CR1, CR2/3 and active disease), source of stem cells (PB vs. BM), donor/recipient CMV seropositivity, in vivo T cell depletion, and year of transplantation. Multivariable analyses were performed using Cox proportional hazards model for LFS and Fine-Gray model for RI and NRM [ 16]. For all prognostic analyses, continuous variables were categorized and the median used as a cut-off point. All interactions between conditioning and other variables were studied. Landmark analysis was performed in order to evaluate the impact of prognostic variables on the outcome of patients alive and with no relapse at 2 years after SCT [ 17]. Prognostic factors for assessment of outcomes subsequent to the landmark time-point were assessed using similar methods. Statistical analyses were performed with SPSS 19.0 (Inc., Chicago) and R2.14.2 software packages (R Development Core Team, Vienna, Austria).

The long-term survival of AML patients age ≥50 years, given SCT from HLA-matched siblings with RIC or MAC regimens is similar. The subsequent outcome of 2-year survivors is also similar as is the kinetics of late events.

The authors would like to thank all EBMT centers for contributing patients to the study and data managers for their great work. A complete list of the members of the European Blood and Marrow Transplantation Group appears in Additional file 1.

The datasets analyzed during the current study are available from the corresponding author on reasonable request.

AS, ML, MM, and AN designed the research, analyzed and interpreted data, and wrote the manuscript; BS, LV, GE, JK, DB, NS, SV, AB, HV, JS, ME, and DN provided patients, collected and analyzed data, and critically reviewed the manuscript before submission. All authors read and approved the final manuscript.

Since 1990, patients provide informed consent authorizing the use of their personal information for research purposes. Data were provided, and the study design was approved by the acute leukemia working party (ALWP) of the EBMT group registry, in accordance with the EBMT guidelines for retrospective studies.
Open AccessThis article is distributed under the terms of the Creative Commons Attribution 4.0 International License ( http://​creativecommons.​org/​licenses/​by/​4.​0/​), which permits unrestricted use, distribution, and reproduction in any medium, provided you give appropriate credit to the original author(s) and the source, provide a link to the Creative Commons license, and indicate if changes were made. The Creative Commons Public Domain Dedication waiver ( http://​creativecommons.​org/​publicdomain/​zero/​1.​0/​) applies to the data made available in this article, unless otherwise stated. 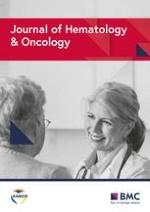 Efficacy and safety of angiogenesis inhibitors in advanced gastric cancer: a systematic review and meta-analysis