The prevalence and clinical significance of overt hepatitis B (OHB) in human immunodeficiency virus (HIV)-infected individuals and the effect of HAART on this cryptic infection remain controversial. We have investigated the potential effect of the interruption and subsequent re-introduction of highly active antiretroviral therapy (HAART) on the frequency and dynamics of OHB in HIV-infected individuals.

This pilot study involved 29 HIV-infected individuals who tested positive for HB anti-core antibodies in the absence of surface antigen during a 100-week period (48-week-long interruption of HAART or lamivudine monotherapy plus 52 weeks of follow-up prior to HAART resumption). The frequency and dynamics of OHB were assessed by means of qualitative detection tests and quantification in the plasma. Resistance to HBV was determined by direct sequence analysis of the polymerase gene.

Of the 29 HIV-infected individuals enrolled in the study, nine (31%) showed signs of OHB during the 100-week study period: three patients showed intermittent HB virus (HBV)-DNAemia, while six patients were HBV-DNA positive only at 16 weeks following HAART resumption. The HBV-DNA load invariably fell below the sensitivity of the quantitative test (103 copies/mL). The HIV-related immuno-virologic profile and biochemical parameters, including hepatic transaminases, of patients with at least one HBV-DNA positive test result were not significant different from those of individuals who consistently tested negative for HBV-DNA. The only significant parameter was a lower median change (Δ1) in the CD4+/CD8+ ratio (p = 0.038) in occult HBV cases compared to non-occult cases, between the HAART re-introduction time point and baseline.

The intermittent nature of HBV-DNAemia poses a diagnostic challenge, but no association was found with transaminase levels at any time. 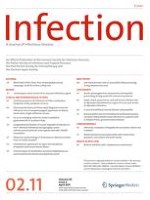 WHO SAVE LIVES: Clean Your Hands global annual campaign. A call for action: 5 May 2011

Septic shock, pneumonia, and soft tissue infection due to Myroides odoratimimus: report of a case and review of Myroides infections