PR-OCTA showed the three distinct vascular plexuses in BRVO. The VDs remained unchanged during the follow-up period in the SCP and DCP but increased significantly in the ICP during remission. Inner retinal thinning might cause increases in the VD in the ICP because of projection artifacts and segmentation errors despite using PR-OCTA. 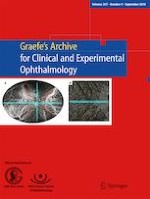 Splitting of the lateral rectus muscle with medial transposition to treat oculomotor palsy: a retrospective analysis of 29 consecutive cases

Deciphering the role of circulating lncRNAs: RNCR2, NEAT2, CDKN2B-AS1, and PVT1 and the possible prediction of anti-VEGF treatment outcomes in diabetic retinopathy patients

Clinical and etiologic characteristics of de novo uveitis in patients aged 60 years and above: experience of a French tertiary center