Obstructive nephropathy is a common cause for chronic kidney disease. Surgery, which is adopted to promptly relieve the obstruction, is the most important method to save damaged kidneys. However, earlier studies have shown that renal function will continue to deteriorate until the terminal stage after the obstruction’ relief. The aim of this study is to explore the renal fibrosis and investigate the effect of losartan on renal fibrosis after the obstruction’ relief using an improved mouse model of relief for unilateral ureteral obstruction (RUUO). Experiments carried out using C57BL/6 mice (n = 30) were randomly divided into RUUO + Losartan group, RUUO group and sham group. Using an improved mouse RUUO model, this study revealed that the mouse kidney for 3- or 7-day unilateral ureteral obstruction undergoing the RUUO surgery was still in a state of injury and fibrosis, while losartan could effectively ameliorate renal fibrosis by upregulating the expression of CD4 + CD25 + Foxp3 + regulatory T cells (Tregs) in kidney after the surgery of RUUO. 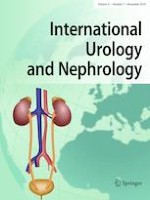 Urology - Letter to the Editor

Letter to the editor Re: MR urethrography compared with operative findings for the evaluation of urethral strictures

Cinacalcet plus vitamin D versus vitamin D alone for the treatment of secondary hyperparathyroidism in patients undergoing dialysis: a meta-analysis of randomized controlled trials