The online version of this article (https://​doi.​org/​10.​1007/​s10815-019-01575-x) contains supplementary material, which is available to authorized users.
Shuqiang Chen and Meizi Zhang contributed equally to this work.

Studies on rodents have shown that assisted reproductive technologies (ARTs) are associated with perturbation of genomic imprinting in blastocyst-stage embryos. However, the vulnerable developmental window for ART influence on the genomic imprinting of embryos is still undetermined. The purpose of this study was to establish the specific embryonic development stage at which the loss of methylation of H19 imprinting control regions (ICRs) was caused by ART occurrence. Additionally, we explored protocols to safeguard against possible negative impacts of ART on embryo H19 imprinting. 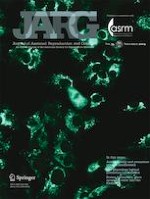 A 2019 reproductive update from the Midwest Reproductive Symposium International