There has been increased awareness recently of the unique medical and psychosocial needs of adolescents and young adults (AYAs) with cancer. However, the existing AYA literature is mainly focused on curative disease or survivorship rather than on advanced disease. Using qualitative methodology, we sought to understand the experience of younger adults with advanced cancer.

The diagnosis of cancer was universally experienced as isolating and unexpected, with serious illness regarded as a problem of older individuals. The core challenge of living in the face of dying was felt to be constantly present yet typically unarticulated. Meaning-making tended to be constructed around future-oriented goals rather than upon the life that had been lived. Individuals felt forcefully removed from the stream of life, with a perceived interruption in the developmental tasks of establishing adult identity, becoming autonomous, and forming new relationships. All cited a need for young adult-specific services, yet none could describe specific services that would be beneficial. Many expressed reluctance to engage in individual psychotherapeutic treatment.

Advanced cancer in younger adults was perceived by them as isolating and as interfering with age-appropriate developmental tasks. Creative and flexible psychosocial support programs are needed to engage this population with limited expected survival. 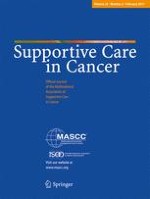 Definition and estimation of osteonecrosis of jaw (ONJ), and optimal duration of antiresorptive treatment in bone metastatic cancer patients: supplementary data from the denosumab extension study?