Hip fractures in patients older than 60 years of age represent a serious morbidity linked to osteoporosis that contributes to its mortality rates. Both genetic and environmental influences have been reported as important factors related to the epidemiology of osteoporosis. Sobral, a city located in the northeast (equatorial zone) of Brazil (3ºS/40ºE) has 138,565 inhabitants, who are mostly white Portuguese and native Brazilian descendants. We evaluated the occurrence of hip fractures in Sobral between July 1996 and June 2000. This was a retrospective cohort-based study. Data were obtained from the medical records of the Santa Casa de Sobral, which is the reference hospital in this area. All chart records of patients aged >20 years with a diagnosis of femoral or hip fracture were revised. A total of 79 fractures were identified. Ten cases (12.6%) that occurred in patients <50 years of age were excluded from further analysis. Sixty-nine cases (87.3%) occurred in patients aged >50 years, comprising 19 (27.5%) men and 50 (72.4%) women. This gives an age-adjusted annual incidence rate of 5.59/10,000 per year in men and 12.4/10,000 per year in women, respectively, for people >50 years of age. Two patients, aged 79 and 82, died 9 and 6 days, respectively, after hospital admission. The average time of hospitalization was 7.5 days (range 4–19 days). As expected, there was a significant rise in hip fractures in people >50 years old. Interestingly, the hip fracture rate in this population is considerably lower (around 4 times less) than the reported rates in white Caucasians. 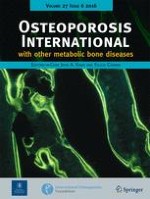 Changes in bone mineral density in the hip and spine before, during, and after the menopause in elite runners

Pharmacovigilance study of alendronate in England

Place of residence and risk of fracture in older people: a population-based study of over 65-year-olds in Cardiff