We determined the rates of initial lymph node metastasis following curative resection of mass-forming type-intrahepatic cholangiocarcinoma (ICC) in patients with and without hepatitis virus infection.

We enrolled 87 patients between January 2000 and December 2013 with ICC without preoperative lymph node metastasis and without lymph node dissection. Patients included 32 who were seropositive for hepatitis B or C virus (virus group) and 55 who had no evidence of hepatitis virus infection (nonvirus group). Postsurgical outcomes and initial recurrence of the groups were compared, and we identified the risk factors for lymph node metastasis as initial recurrence. 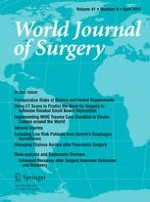 Anatomical Variations of the Venous Drainage from the Left Adrenal Gland: An Anatomical Study