In this study, cytokine levels, outcome, and survival rates after esophagectomy for esophageal cancer were retrospectively investigated in a propensity score-matched comparison of operative approaches between the thoracoscopic esophagectomy (TE) in the prone position and open esophagectomy (OE).

Between 2005 and 2014, TE was performed on a group of 85 patients, which was compared with a group of 104 OE cases. Eventually, 65 paired cases were matched using propensity score matching.

TE compared to OE is a less invasive procedure with lower surgical stress and less pulmonary complication for the treatment of esophageal squamous cell carcinoma. 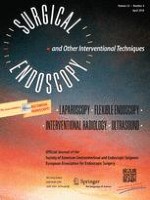 Determinants of variability in management of acute calculous cholecystitis

What are the influencing factors for chronic pain following TAPP inguinal hernia repair: an analysis of 20,004 patients from the Herniamed Registry

Growth in robotic-assisted procedures is from conversion of laparoscopic procedures and not from open surgeons’ conversion: a study of trends and costs

Laparoscopic parenchymal sparing resections in segment 8: techniques for a demanding and infrequent procedure

Robotic ventral hernia repair is not superior to laparoscopic: a national database review