Low-level laser therapy (LLLT) is widely used in clinical practice for treatment of various pathologies. It is assumed that LLLT impact on microcirculation is among the mechanisms underlying its therapeutic effect. The microcirculation disorder is observed in the pathogenesis of any inflammatory process and is significantly influenced by red blood cells (RBCs). On this point, studying the RBCs morphology under the influence of LLLT on alterated organism is of scientific interest and practical importance. The aim of the present study was to analyze the LLLT effect on morphokinetic parameters of RBCs in hyperadrenalinemia. The LLLT effect was analyzed on rats intraperitoneally injected with adrenaline hydrochloride solution (0.1 mg/kg). As the comparison groups, the effects of LLLT, adrenaline, or saline injection as well as the parameters of intact animals were studied. LLLT was applied on the occipital region of rats for 10 min. The light irradiation with pulse frequency 415 Hz at 890 nm wavelength and average power density in the plane of the output window at 193 μW/cm2 was used. The dynamics of morphological characteristics of RBCs was studied by phase interference microscopy; the RBC electrophoretic mobility was tested by microelectrophoresis technique; photometric analyses of the RBCs amount, hemoglobin content, and osmotic fragility were performed. The adrenaline injection resulted in a significant increase in the amount of RBC pathological forms and a decrease in discocytes and normocytes by more than 50%. An increase in the optical density of RBC phase portraits, a decline in osmotic resistance, and electronegativity of RBC membranes and a reduction of their number in peripheral blood were also registered. The revealed effects persisted for 1 week after the adrenaline administration. LLLT did not significantly impact on the RBC parameters 1 h after adrenaline injection. However, a day later, LLLT reduced the severity of the adrenaline effect on RBSs, which was manifested in a decreased amount of the pathological forms of RBCs, restored RBC phase portraits, higher electrophoretic mobility and osmotic resistance, and RBSs amount in peripheral blood restored up to the level of intact animals. We suppose that the mechanism of LLLT action is realized both at cellular level through the laser radiation effect on RBC membranes, and at systemic level through the activation of stress-realizing systems of the organism with subsequent limitation of inflammatory response. 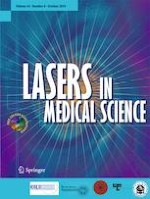 Study of transcranial therapy 904 nm in experimental model of stroke

Changes in local skin temperature after the application of a pulsed Nd:YAG laser to healthy subjects: a prospective crossover controlled trial