The aim of this study was to verify if low-level laser therapy could be useful to reduce chemotherapy-related oral mucositis grading and pain in childhood undergoing chemotherapy. A randomized double-blind clinical trial was carried out. Patients from 3 to 18 years of age undergoing cancer therapy and presenting OM grade 2 or more were eligible for this study. Patients were randomly divided in two groups: group A received laser therapy from the day of OM diagnosis and other 3 consecutive days (830 nm wavelength, power 150 mW, spot size 1 cm2, 30 s per cm2, energy density 4.5 J/cm2); group B received sham therapy (placebo) with the same timing. Two blind clinicians performed OM scoring and pain evaluation at day 1 (immediately before the beginning of laser treatment—T0), day 4 (after finishing laser therapy cycle—T1) and at day 7 (T2) as follow-up. A total of 123 patients were included in the study. Group A was composed of 62 children while group B is 61; in both groups, there was a progressive reduction in grade of OM, and at day 7, not every mucosal lesion disappeared. The difference in the decline of OM grading between the two groups resulted not statistically significant (p = 0.07). A statistically significant difference in pain reduction between two groups both at T1 and at T2 (p < 0.005) was observed. This study demonstrated the efficacy of LLLT in reducing pain due to chemotherapy-induced oral mucositis in children, while no significant benefit was noted in reducing OM grade. 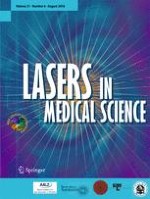 Muscle relaxation for individuals having tattoos removed through laser treatment: possible effects regarding anxiety and pain