Recent attention given to the mechanical work of the lower extremity joints, the emerging importance of the stance phase of running, and the lack of consensus regarding the biomechanical correlates to economical running were primary justifications for this study. The purpose of this experiment was to identify the correlations between metabolic power and the positive and negative mechanical work at lower extremity joints during stance. Recreational runners (n = 16) ran on a treadmill at 3.35 m s−1 for physiological measures and overground for biomechanical measures. Inverse dynamics were used to calculate net joint moments and powers at the ankle, knee, and hip. Joint powers were then integrated over the stance phase so that positive and negative joint mechanical work were correlated with metabolic power (r = 0.60–0.69). Positive work at the hip and ankle during stance was positively correlated to metabolic power. In addition to these results, more economical runners (lower metabolic power) exhibited greater negative work at the hip, greater positive work at the knee, and less negative work at the ankle. Between the most and least economical runners, different mechanical strategies were present at the hip and knee, whereas the kinetics of the ankle joint differed only in magnitude. 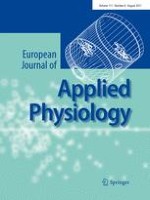 Implementation of evidence-based health promotion and disease prevention interventions: theoretical and practical implications of the concept of transferability for decision-making and the transfer process