Our objective was to identify and evaluate differences in lower limb biomechanics during high-demand single-limb landings between the ACLR limb and the contralateral limb and healthy control participants.

A systematic review of the literature was conducted using six electronic databases searched until April 2017 for published peer-reviewed studies that investigated lower limb biomechanics on the ACLR limb compared with either the contralateral limb or those of control participants. Meta-analysis with standardized mean differences (SMD) were performed for peak angles and moments (hip, knee and ankle joints) in the sagittal plane during single-limb landing tasks.

Participants performed single-limb landings on the ACLR limb with reductions in peak sagittal knee kinematics as well as peak joint moments compared with both the contralateral limb and a control group. Stiffer single-leg landings potentially expose the knee joint to higher forces, which may increase risk of injury. Clinical testing after ACLR surgery should explore movement quality as well as performance of functional tasks. 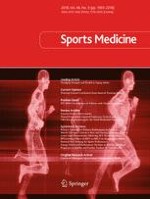 Exercise-Derived Microvesicles: A Review of the Literature

The Effectiveness of Resisted Sled Training (RST) for Sprint Performance: A Systematic Review and Meta-analysis

The NBA and Youth Basketball: Recommendations for Promoting a Healthy and Positive Experience

Threshold of Energy Deficit and Lower-Body Performance Declines in Military Personnel: A Meta-Regression

Are the Mechanical or Material Properties of the Achilles and Patellar Tendons Altered in Tendinopathy? A Systematic Review with Meta-analysis