The objective of this study was to assess lower urinary tract symptoms (LUTS), urinary incontinence (UI), erectile dysfunction (ED) and quality of life after radical prostatectomy (RPE) and external beam radiation therapy (EBRT) in a “real-life” setting. A consecutive series of patients undergoing routine follow-up after RPE and EBRT at 28 Austrian institutions were analyzed. Men who received adjuvant therapy were excluded. All patients completed a questionnaire on (a) LUTS and UI, (b) sexual function and (c) quality of life. A total of 364 patients following RPE and 82 after EBRT entered this study and were compared in a matched pair analysis (1:1) based on age, PSA at diagnosis and follow-up (RPE: n=82; EBRT: n=82). Mean time-interval between treatment and current investigation was 4.6 years for RPE and 4.4 years for EBRT (n.s.). UI was reported by 41.3% after RPE and 18.8% after EBRT (P=0.001). Urgency was more frequent after EBRT, this difference, however, did not reach statistical significance. Moderate to severe ED (IIEF-5, <17) was present in 80.0% after RPE and in 80.8% after EBRT (n.s.). On a ten-point scale, RPE-patients rated their quality of life higher (7.3) than after EBRT (6.7) (P=0.01). In this “real-life” setting, RPE and EBRT had significant, yet divergent effects on LUTS, UI and sexual function. The respective numbers were substantially higher than those usually reported by physician-directed studies and centers of excellence. 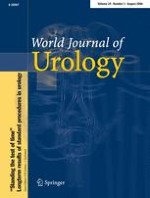 Results of orchiopexy for the undescended testis

Standing the test of time: the long-term results of urethroplasty

Long-term results of standard procedures in urology: the ileal neobladder