Detecting weaning-induced pulmonary oedema (WIPO) is important because its treatment might prompt extubation. For this purpose, lung ultrasound might be an attractive tool, since it demonstrates pulmonary oedema through the appearance of B-lines.

To test the ideal profile (increase in the number of B-lines) for diagnosing WIPO.

Before and at the end of 62 spontaneous breathing trials (SBT) performed in 42 patients, we prospectively assessed lung ultrasound on four anterior chest wall points. B-lines were counted before and at the end of SBT. We looked for the threshold of B-line increase (Delta-B-lines) that provided the best diagnostic accuracy, compared to the reference diagnosis of WIPO established by experts blinded to lung ultrasound.

This study suggests that a Delta-B-lines ≥  6 on four anterior points allows the diagnosis of WIPO with the best accuracy. This should be confirmed in larger populations. 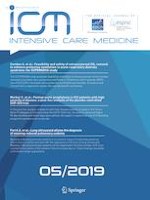 Microbiota in ICU, not only a gut problem

HHV8-related hemophagocytic syndrome: diagnosis is in the eye