To determine the physiology of the macula by the focal macular electroretinograms (fmERGs) in patients with branch retinal vein occlusion with macular edema (BRVOME) treated by intravitreal injections of ranibizumab (IVR).

We studied 17 eyes of 17 patients with BRVOME. The contralateral unaffected eyes served as controls. All patients were treated with an IVR at monthly intervals for 3 consecutive months. The baseline best-corrected visual acuity (BCVA), optical coherence tomographic (OCT) findings, and fmERGs were compared to the post-treatment values. The fmERGs were elicited by a 15° circular spot or a superior or inferior semicircular spot. The center of the spot was placed on the fovea. The amplitudes of the a- and b-waves, photopic negative response (PhNR), and sum of the oscillatory potentials (ΣOPs: sum of OP1, OP2, and OP3 amplitudes) were measured. In addition, the implicit times of the a- and b-waves were also measured. 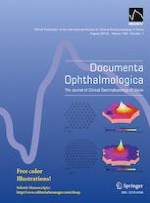 Correlation between electroretinography, foveal anatomy and visual acuity in albinism

Retinal dystrophies with bull’s-eye maculopathy along with negative ERGs

A case of X-linked retinoschisis with atypical fundus appearance