Magnetic compression anastomosis (MCA) is a revolutionary minimally invasive method to perform choledochocholedochostomy in patients with benign biliary stricture (BBS). We conducted MCA for the treatment of severe BBS that could not be treated by conventional methods.

Patients with BBSs that could not be treated using conventional treatments were included. All patients underwent percutaneous transhepatic biliary drainage (PTBD) before MCA, and underwent cholangiography via simultaneous PTBD and endoscopic retrograde cholangiopancreatography (ERCP). The MCA device consisted of a parent and a daughter magnet. The daughter magnet was delivered via the PTBD route to the proximal end of the obstruction, and the parent magnet was delivered via ERCP to the distal end of the obstruction. After recanalization, the MCA device was removed, and biliary stenting (or PTBD) was performed for at least 6 months.

Of the 9 patients (age 49 ± 12.9 years), 6 had undergone orthotopic liver transplantation. MCA was successful in all 9 patients. The stricture length was 3 ± 1.7 mm, and recanalization occurred after 16.3 ± 13.2 days. Multiple plastic stents (4 patients), fully covered self-expandable metallic stents (4 patients), or PTBD (1 patient) was used after recanalization. Two mild adverse events occurred (cholangitis, 1 patient; biliary bleeding, 1 patient), but were resolved with conservative treatment. Stents were retrieved after > 6 months, and no stenosis occurred during 2–66 months of stent-free follow-up.

The MCA technique is a revolutionary method for choledochocholedochostomy in patients with severe BBS unresponsive to conventional procedures. 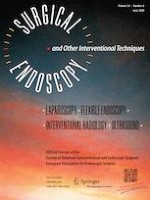