The online version of this article (https://​doi.​org/​10.​1007/​s00066-020-01584-1) contains supplementary material, which is available to authorized users.
Xuanwei Zhang and Shuo Liu contributed equally to this manuscript.

A retrospective dataset of 516 patients with LGGs from The Cancer Genome Atlas (TCGA) database was analysed for the infiltration levels of six types of immune cells using Tumor IMmune Estimation Resource (TIMER) based on RNA sequencing data. Radiomic features were extracted from 107 patients whose pre-operative MRI data are available in The Cancer Imaging Archive; 85 and 22 of these patients were assigned to the training and testing cohort, respectively. The least absolute shrinkage and selection operator (LASSO) was applied to select optimal radiomic features to build the radiomic signatures for extrapolating the infiltration levels of immune cells in the training cohort. The developed radiomic signatures were examined in the testing cohort using Pearson’s correlation.

We developed MRI-based radiomic models for extrapolating the infiltration levels of immune cells in LGGs. Our results may have implications for treatment planning. 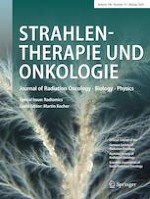 The role of radiomics in prostate cancer radiotherapy