Milk production is highly dependent on the optimal development of the mammary epithelium. It is therefore essential to better understand mammary epithelial cell growth and maintenance from the related epithelial lineage during the animal life. Here, we characterized the epithelial lineage at puberty, lactation and dry-off in bovine using the cell surface markers CD49f, CD24, and CD10. The pubertal period was characterized by a high proportion of CD49fpos cells corresponding to various epithelial subpopulations, notably the CD24pos subpopulations. The proportion of CD49fpos cells was weaker during lactation and dry-off, and CD24pos cells were relatively few. Of note, the (sub)population profile at dry-off appeared close to that during lactation. Using a targeted gene approach, we associated specific genes with epithelial subpopulations, their expression level varying, or not, according to physiological stages. Caseins were only expressed in the CD49fmedCD24neg subpopulation. Basal marker genes (keratin(KRT)5, KRT14 and αSMA) were found in the CD49fhighCD24neg subpopulations. Luminal gene markers (KRT7, KRT8 and KRT19, CDH1 and the PRLR) were expressed in the CD49flowCD24neg subpopulation. The CD49flowCD24pos subpopulation, only abundant at puberty, expressed luminal gene markers and KI67 at high level. In contrast to others, the CD49fhighCD24pos cells accounted for a small proportion of total cells, decreasing from puberty to dry-off. They were characterized by expression of luminal and basal gene markers and low KI67 level. Interestingly, this subpopulation showed a remarkable stability of gene expression profile throughout physiological stages and bear the hallmark of quiescence that designate them as the potential bovine mammary stem cells. 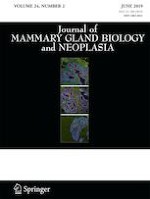 A Comparative Review of Mixed Mammary Tumors in Mammals