Management of congenital pseudarthrosis of the tibia with the Ilizarov method in a paediatric population: influence of aetiological factors | springermedizin.de Skip to main content
SUCHE MENÜ 1 2 3 4

Our study compared the rates of union achieved with the Ilizarov method in congenital pseudarthrosis of the tibia (CPT) associated with neurofibromatosis type 1 (NF1) or CPT of idiopathic origin in paediatric patients.

We studied the outcomes of 28 children that were treated for CPT between 2005 and 2013. Group 1 included children (n = 14, mean age = 9.7 years) with CPT associated with NF1 while group 2 were CPT cases that had radiographic confirmation of dysplastic lesions in the tibia but lacked clinical NF1 manifestations (n = 14, mean age = 8.6 years). There was no statistical difference between the groups regarding their age or number of previous operations per patient. Individual technical solutions were planned for each patient but coaptation of bone fragments and autologous local tissue grafting to achieve a greater bone thickness and contact area at the pseudarthrosis level were mainly used. Refracture-free rate after the first operation, number of re-operations per patient, and union rates in the groups were compared.

Bone union and weight bearing were obtained in all the cases after the first operation. Refracture-free rate was 42.86 % in group 1 and 35.71% in group 2 (no statistical difference, p > 0.05). Mean number of re-operations per patient was 1.07 and 0.78 respectively (p > 0.05). Subsequent treatment for refractures with the Ilizarov techniques gained 92.86% of union in both groups at the follow-ups by completion of the study (range, 2–9 years).

The Ilizarov method yields comparable results in the management of CPT associated with NF1 or tibial dysplasia of idiopathic origin in paediatric cases. Further research should focus on the ways to support the Ilizarov method in order to reduce the number of repetitive surgeries or eliminate them.
Anzeige 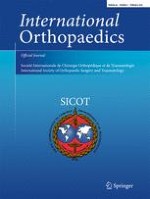 Biomechanical comparison of bionic, screw and Endobutton fixation in the treatment of tibiofibular syndesmosis injuries