March of the Living (MOTL) is a 2-week international educational tour for high school seniors to learn about the Holocaust by visiting concentration/deaths camps and other Jewish historical sites in Poland, culminating in a week-long excursion in Israel. Although the trip is primarily educational, there is recent research evidence to suggest that attendees may suffer from a variety of mental health sequelae. To determine symptoms of anxiety and depression, 196 Los Angeles delegation participants voluntarily completed the State-Trait Anxiety Inventory, composed of a trait anxiety scale (i.e., STAI-T) and a state anxiety scale (i.e., STAI-S), and the Center for Epidemiologic Studies Depression Scale (CES-D). Pre-MOTL, students completed an initial background questionnaire along with the STAI-T, STAI-S, and the CES-D. At end-Poland and end-Israel, the STAI-S and CES-D were administered again. Results demonstrated that depression scores increased during end-Poland and returned to baseline; however, anxiety scores mildly increased end-Poland and rose slightly more and persisted through end-Israel. 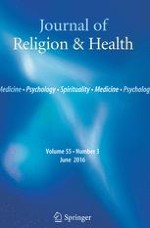 Experience of the Spiritist Hospital Chaplaincy Service: A Retrospective Study