Hemobilia is defined as bleeding into the biliary tract. Herein, we report a very rare case of massive hemobilia following plastic stent (PS) removal in common bile duct (CBD) cancer. A 72-year-old man with primary sclerosing cholangitis had undergone repeated insertion of a PS into the CBD. Biliary tract biopsy was performed based on suspicion of combined CBD cancer. Biopsy revealed poorly differentiated adenocarcinoma of the CBD. One month after the biliary tract biopsy, he was admitted for acute cholangitis, and endoscopic retrograde cholangiography was performed for the exchange of the PS. When one of the two biliary PSs was removed, spurting bleeding from the major papilla began abruptly. The massive bleeding caused the patient to be in a pre-shock state. A retrieval balloon catheter was compressed against the papilla for hemostasis. Although he was treated conservatively, the patient developed a bloody discharge. Upper gastrointestinal endoscopy revealed that the pulsatile bleeding beside the PSs started immediately after the removal of the coagula. Emergent contrast-enhanced computed tomography showed right hepatic artery aneurysm across the CBD. Therefore, transarterial embolization was performed. The patient’s post-therapeutic course was uneventful. He received chemotherapy, but died about a half year after hemobilia occurred. 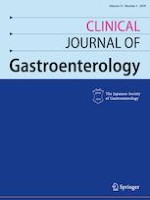