The vertical rectangular flap filled the upper pole and central breast. The triangular flaps apart from filling the lower pole increased the mammary cone projection. The medial rotation advancement of the triangular flaps created a transverse support girdle at the lower pole, maintaining the vertical flap into position. In addition, fixation of the vertical flap along its entire length avoided long-term down-displacement of the breast. A keel resection of mammary parenchyma was performed in the larger breast in mild or moderate asymmetries.

Mastopexy autoaugmentation through an adjustable vertical approach using vertical and triangular flaps of mammary parenchyma filled the upper pole and central breast and reshape the lower pole, recovering the breast contour. It provided long-term stabilization of the mammary cone without a breast implant or fat transfer.

This journal requires that authors assign a level of evidence to each article. For a full description of these evidence-based medicine ratings, please refer to the Table of Contents or the online Instructions to Authors www.​springer.​com/​00266. 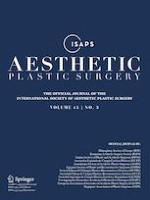 The Use of Platelet-Rich Plasma in Aesthetic and Regenerative Medicine: A Comprehensive Review