Remote ischemic conditioning (RIC) is a powerful innate response to transient subcritical ischemia that protects against severe ischemic insults at distant sites. We have previously shown the safety and feasibility of limb RIC in aneurysmal subarachnoid hemorrhage (aSAH) patients, along with changes in neurovascular and cerebral metabolism. In this study, we aim to detect the potential effect of an established lower-limb conditioning protocol on clinical outcomes of aSAH patients. Neurologic outcome (modified Rankin Scale (mRS)) of patients enrolled in a prospective trial (RIPC-SAH) was measured. A matching algorithm was applied to identify control patients with aSAH from an institutional departmental database. RIC patients underwent four lower-limb conditioning sessions, consisting of four 5-min cycles per session over nonconsecutive days. Good functional outcome was defined as mRS of 0 to 2. The study population consisted of 21 RIC patients and 61 matched controls. There was no significant intergroup difference in age, gender, aneurysm location, clipping vs coiling, Fisher grades, Hunt and Hess grades, or vasospasm. RIC was independently associated with good outcome (OR 5.17; 95 % confidence interval (CI) 1.21–25.02). RIC also showed a trend toward lower incidence of stroke (28.6 vs. 47.5 %) and death (4.8 vs. 19.7 %). Lower-limb RIC following aSAH appears to have a positive effect in the functional outcomes of patients with aSAH. While this effect is consistent with prior preclinical studies, future trials are necessary to conclusively evaluate the effects of RIC for aSAH. 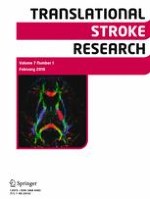 Cofilin as a Promising Therapeutic Target for Ischemic and Hemorrhagic Stroke

Co-ultramicronized Palmitoylethanolamide/Luteolin in the Treatment of Cerebral Ischemia: from Rodent to Man

Animal Models for the Study of Subarachnoid Hemorrhage: Are We Moving Towards Increased Standardization?