Pregnancy should be scheduled at least 1 year after BS. Malabsorptive procedures are associated to a higher rate of SGA births. 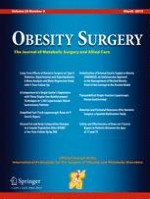 Response to Commentary: “A Comparative Study of Three-Year Weight Loss and Outcomes After Laparoscopic Gastric Bypass in Patients with ‘Yellow Light’ Psychological Clearance”

Systematic Review of Definitions of Failure in Revisional Bariatric Surgery