A water-soluble Cremophor EL-free formulation of paclitaxel, in which retinoic acid derivates solubilize paclitaxel by forming micelles (paclitaxel micellar), was studied for the first time in man to establish the maximum tolerated dose (MTD) and to characterize the pharmacokinetics (PK).

This was an open-label, one-arm, dose-escalating study in patients with advanced solid malignant tumours, for which no standard therapy was available or had failed. Paclitaxel micellar was given as 1-h intravenous infusion every 21 days for 3 cycles, mainly without premedication. Plasma samples were collected during 24 h at the first cycle and paclitaxel concentrations were assayed by high-performance liquid chromatography. PK was evaluated using a two-compartment model.

Thirty-four patients received paclitaxel micellar at doses ranging between 90 and 275 mg/m2. MTD was established as 250 mg/m2. Fatigue and neuropathy were the most frequent dose-limiting toxicities. No hypersensitivity reactions were observed. PK of paclitaxel was evaluated in 25 data sets. Paclitaxel micellar had a rapid initial distribution phase, mean half-life 0.55 h, estimated to be completed 3 h after dosing and a mean terminal half-life of 8.8 h. Mean clearance was 13.4 L/h/m2 with fivefold interindividual variability. The residual areas after 10 h and 24 h were 15.7 ± 8.6% and 5.7 ± 3.9% of the area under the plasma concentration–time curve to infinite time (AUCinf), respectively.

No new side effects unknown for paclitaxel were observed. Maximum plasma concentration (Cmax) and AUCinf showed a tendency to increase linearly with dose within the 150–275 mg/m2 dose range. The possibility to administer paclitaxel micellar without steroid premedication makes it an attractive candidate for further studies in combination with immunotherapy. 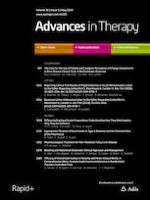 The Effectiveness, Safety, and Tolerability of Pirfenidone in Idiopathic Pulmonary Fibrosis: A Retrospective Study

Economic Burden of Illness Among Commercially Insured Patients with Systemic Sclerosis with Interstitial Lung Disease in the USA: A Claims Data Analysis