The dynamic interaction between tumor cells and their microenvironment induces a proinflammatory milieu that drives cancer development and progression. The S100A8/A9 complex has been implicated in chronic inflammation, tumor development, and progression. The cancer microenvironment contributes to the up-regulation of this protein complex in many invasive tumors, which is associated with the formation of pre-metastatic niches and poor prognosis. Changing adhesive preference of cancer cells is at the core of the metastatic process that governs the reciprocal interactions of cancer cells with the extracellular matrices and neighboring stromal cells. Cell adhesion molecules (CAMs) have been confirmed to have high-level expression in various highly invasive tumors. The expression and function of CAMs are profoundly influenced by the extracellular milieu. S100A8/A9 mediates its effects by binding to cell surface receptors, such as heparan sulfate, TLR4 and RAGE on immune and tumor cells. RAGE has recently been identified as an adhesion molecule and has considerably high identity and similarity to ALCAM and MCAM, which are frequently over-expressed on metastatic malignant melanoma cells. In this study, we demonstrated that ALCAM and MCAM also function as S100A8/A9 receptors as does RAGE and induce malignant melanoma progression by NF-κB activation and ROS formation. Notably, MCAM not only activated NF-κB more prominently than ALCAM and RAGE did but also mediated intracellular signaling for the formation of lung metastasis. MCAM is known to be involved in malignant melanoma development and progression through several mechanisms. Therefore, MCAM is a potential effective target in malignant melanoma treatment. 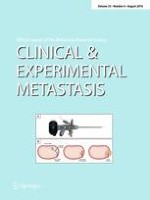