An original tensor system was developed to directly measure the load between femoral trial component and tibial cut surface in vivo in both patella everted and reset positions during total knee arthroplasty (TKA). We used this system during posterior-stabilized (PS) and cruciate-retaining (CR) TKA. In PS-TKA, there was no significant difference between the loads in extension in patella everted position and reset position. In flexion, however, there was significant increase of load in patella reset position compared to in everted position. In CR-TKA, there was no significant difference between the loads in patella everted position and in patella reset position in either extension or flexion. It was found that the effect of patella position on joint gap load was different between PS-TKA and CR-TKA. It is important to be aware that, when performing PS-KA, the load in flexion gap will increase, in other words, flexion gap distance will decrease by resetting the patella. 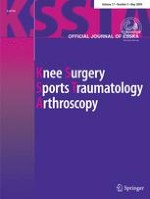