Measuring research impact is of critical interest to philanthropic and government funding agencies interested in ensuring that the research they fund is both scientifically excellent and has meaningful impact into health and other outcomes. The Beat Cancer Project (BCP) is a AUD $34 m cancer research funding scheme that commenced in 2011. It was initiated by an Australian charity (Cancer Council SA), and supported by the South Australian Government and the state’s major universities.

This study applied Buxton and Hanney’s Payback Framework to assess research impact generated from the BCP after 3 years of funding. Data sources were an audit of peer-reviewed publications from January 2011 to September 2014 from Web of Knowledge and a self-report survey of investigators awarded BCP research funding during its first 3 years of implementation (2011–2013). Of the 104 surveys, 92 (88%) were completed.

The BCP performed well across all five categories of the Payback Framework. In terms of knowledge production, 1257 peer-reviewed publications were generated and the mean impact factor of publishing journals increased annually. There were many benefits to future research with 21 respondents (23%) reporting career advancement, and 110 higher degrees obtained or expected (including 84 PhDs). Overall, 52% of funded projects generated tools for future research. The funded research attracted substantial further income yielding a very high rate of leverage. For every AUD $1 that the cancer charity invested, the BCP gained an additional AUD $6.06. Five projects (5%) had informed policy and 5 (5%) informed product development, with an additional 31 (34%) and 35 (38%) projects, respectively, anticipating doing so. In terms of health and sector and broader economic benefits, 8 (9%) projects had influenced practice or behaviour of health staff and 32 (34%) would reportedly to do so in the future. 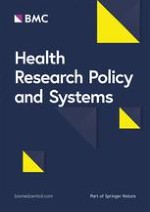 How can the impact of national recommendations for physical activity be increased? Experiences from Germany

What can we learn from interventions that aim to increase policy-makers’ capacity to use research? A realist scoping review

Developing the National Knowledge Platform in India: a policy and institutional analysis

How is the use of research evidence in health policy perceived? A comparison between the reporting of researchers and policy-makers

Common issues raised during the quality assurance process of WHO guidelines: a cross-sectional study