The aim of the present study was to further elucidate the role of JAK2/STAT3-CAV-1-NR2B on painful diabetic neuropathy.

The expression of p-JAK2, p-STAT3, t-CAV-1, and p-NR2B was upregulated in the dorsal horn of DNP rats throughout the experiment. Through the immunofluorescence double staining experiment, it was found that p-STAT3 was mainly expressed in activated microglia, and this condition can be stably maintained for approximately 2 weeks after the establishment of the DNP model. The intrathecal injection of JAK2 inhibitor AG490 can relieve the abnormal expression of p-JAK2, p-STAT3, t-CAV-1, and p-NR2B, and relieve pain. The remission of AG490 began on the third day, and it could be stably sustained for 14 days. In vitro high-glucose induced the activation of p-STAT3 in microglia, thereby upregulating the expression of p-CAV-1 and p-NR2B in neurons in the co-culture system. JAK2 inhibitor AG490 can alleviate the abnormal expression of these proteins in the JAK2/STAT3-CAV-1-NR2B signaling pathway in vitro. 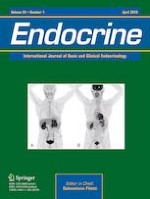 Excess mortality after craniopharyngioma treatment: are we making progress?

Acromegaly can be cured by first-line pasireotide treatment?