The medial patellofemoral ligament (MPFL) is the most important ligamentous stabilizer preventing lateral patella dislocation. Numerous surgical procedures for MPFL reconstruction have been described in the literature. The aim of this study was to investigate the clinical, functional and patient-reported (PROM) outcomes 2 years after minimally invasive MPFL reconstruction performed using an autologous strip of the quadriceps tendon.

Thirty-six patients (38 knees) were included in the study. For MPFL reconstruction, a partial thickness autologous quadriceps tendon graft was used. All patients were evaluated clinically and with patient-reported outcome questionnaires including the Tegner, Lysholm and Kujala scores as well as a visual analogue scale (VAS) for pain preoperatively and at 6, 12 and 24 months postoperatively. A functional Back-in-Action (BIA) test battery, including a total of seven stability, agility and jumping tests, was performed on 19 (50%) patients at the final follow-up. One patient was lost to follow-up at 24 months.

Minimally invasive MPFL reconstruction with a partial thickness strip of quadriceps tendon is a safe and effective treatment for patellofemoral instability. Good clinical, functional and subjective results were observed at the 2-year follow-up. 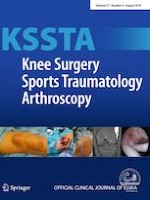 Complications and technical failures are rare in knee ligament reconstruction: analyses based on 31,326 reconstructions during 10 years in Denmark