Poor adherence may have a major impact on clinical outcome, contributing to substantial worsening of disease, increased health care costs and even death. With increasing numbers of medications, low adherence is a growing concern, seriously undermining the benefits of current medical care. Little is known about medication adherence among older adults living at home and requiring complex medication regimens.

The aim of this study was to describe adherence to drug prescriptions in a cohort of elderly patients receiving polypharmacy, discharged from an internal medicine ward.

A sample of elderly patients (65 years of age or older) discharged from an internal medicine ward in Italy throughout 2012 were enrolled. They were followed for 3 months after discharge with a structured telephone interview to collect information on drug regimens and medication adherence 15–30 days (first follow-up) and 3 months (second follow-up) after discharge. Demographic variables including age, sex, marital status and caregiver were collected.

Low medication adherence is a real, complex problem for older patients receiving polypharmacy. We found that the increasing number of drugs prescribed at hospital discharge is correlated to non-adherence and a high percentage of patients did not understand the purpose of their medications. Simplification of drug regimens and reduction of pill burdens as well as better explanations of the reason for the medications should be targets for intervention. 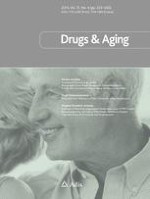 Use of Benzodiazepines and Association with Falls in Older People Admitted to Hospital: A Prospective Cohort Study

Authors’ Reply to Bahat: “Recommendations to Prescribe in Complex Older Adults: Results of the CRIteria to Assess Appropriate Medication Use Among Elderly Complex Patients (CRIME) Project”

Managing Moderate-to-Severe Psoriasis in the Elderly