Melorheostosis (MEL) is an uncommon, sclerosing disease, characterised by hyperostosis of long bones, resembling the flowing of candle wax. The disease is sporadic and the pathogenesis is still poorly understood. Occasionally, the same family can include individuals with MEL and Osteopoikilosis (OPK), a disease characterised by multiple round foci of increased bone density. LEMD3 gene mutations are related to OPK and Buschke–Ollendorff Syndrome, a genetic condition in which an association between MEL, OPK and skin lesions is observed. In rare cases, LEMD3 mutations and recently mosaic MAP2K1 gene mutations have been correlated to MEL suggesting that somatic mosaicism could be causative of the disease. In this study, we described the clinical, radiological and molecular findings of 19 individuals with MEL and 8 with OPK and compared the results to the medical literature. The molecular analyses of this case series corroborate the available data in the medical literature, indicating that LEMD3 germline mutations are not a major cause of isolated MEL and reporting five further cases of OPK caused by LEMD3 germline mutations. 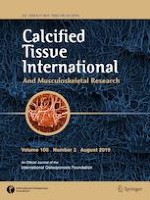 The Association of Aromatic Amino Acids with Incident Hip Fracture, aBMD, and Body Composition from the Cardiovascular Health Study

Correction to: Is There Enough Evidence for Osteosarcopenic Obesity as a Distinct Entity? A Critical Literature Review

Is There Enough Evidence for Osteosarcopenic Obesity as a Distinct Entity? A Critical Literature Review