Meniscal cysts are rare in Stoller grade II horizontal lesions. Several techniques are described in the literature for their management, without any real gold standard. The objective of this work was to report a series of meniscal sutures associated with cyst resection by arthrotomy. The hypothesis was that the results were satisfactory and comparable with the data in the literature regardless of the technique reported without morbidity added by arthrotomy.

This was a monocentric retrospective study on 13 patients, aged 33 on average with a grade II meniscus lesion associated with a cyst (9 lateral and 4 medial menisci). Pre-operative data available was the VAS (5.7/10) and the Lysholm score (61/100). Primary endpoints were as follows: pain (visual analogue scale), global satisfaction, Lysholm functional score, and return to sports and professional activities at a minimum of two years. Secondary endpoints were complications, possible recurrence, and/or surgical revision. Recurrences, complications, and surgical recovery were gathered.

Patients were evaluated with an average follow-up of 32 months. All patients were satisfied or very satisfied. The VAS significantly improved (0.2/10, p < 0.05) as well as the Lysholm score (97/100, p < 0.05). All patients returned to their professional activity: 11 within two months, one within six weeks, and one in the first post-operative week (this patient being a student). Only one patient did not resume pre-operative sport level due to a femoropatellar syndrome, not linked to the meniscal surgery performed. However, only 11 patients resumed their previous sport level (84.6%). No recurrence or surgical revision occurred.

The results confirm the effectiveness of a direct approach suture of non-transfixing meniscal lesions associated with a cyst resection with a good functional recovery, without additional morbidity. The hypothesis was confirmed. 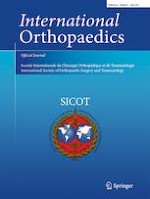 Relationship between skin and urine colonization and surgical site infection in the proximal femur fracture: a prospective study