Religion/spirituality has been increasingly examined in medical research during the past two decades. Despite the increasing number of published studies, a systematic evidence-based review of the available data in the field of psychiatry has not been done during the last 20 years. The literature was searched using PubMed (1990–2010). We examined original research on religion, religiosity, spirituality, and related terms published in the top 25 % of psychiatry and neurology journals according to the ISI journals citation index 2010. Most studies focused on religion or religiosity and only 7 % involved interventions. Among the 43 publications that met these criteria, thirty-one (72.1 %) found a relationship between level of religious/spiritual involvement and less mental disorder (positive), eight (18.6 %) found mixed results (positive and negative), and two (4.7 %) reported more mental disorder (negative). All studies on dementia, suicide, and stress-related disorders found a positive association, as well as 79 and 67 % of the papers on depression and substance abuse, respectively. In contrast, findings from the few studies in schizophrenia were mixed, and in bipolar disorder, indicated no association or a negative one. There is good evidence that religious involvement is correlated with better mental health in the areas of depression, substance abuse, and suicide; some evidence in stress-related disorders and dementia; insufficient evidence in bipolar disorder and schizophrenia, and no data in many other mental disorders. 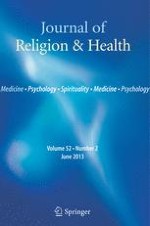 THE IMPORTANCE OF SUFFERING: THE VALUE AND MEANING OF EMOTIONAL DISCONTENT.