Adolescence is a period of elevated stress for many young people, and it is possible that the challenges of adolescence are different for vulnerable groups. We aimed to document the depressive and anxiety symptoms, emotional–behavioural difficulties and suicidal/self-harming behaviours among adolescents with borderline intellectual functioning (BIF) or a disability, compared to those with neither disability nor BIF. Data were drawn from the nationally representative Longitudinal Study of Australian Children. Participants were 2950 adolescents with complete data for waves 3–6 (years 2008–2014), aged 14–15 years in 2014. Anxiety and depression symptoms and self-harming/suicidal thought/behaviours were self-reported. Emotional–behavioural difficulties items came from the Strengths and Difficulties Questionnaire, and were parent-, and adolescent-reported. Results of logistic regression analyses indicate that the emotional–behavioural difficulties of adolescents with either a disability or BIF, were worse than for those with neither disability nor BIF. While adolescents with a disability reported more anxiety symptoms, no clear associations were observed for self-harming/suicidal thoughts/behaviours or depressive symptoms for those with either BIF or a disability. Adolescents with BIF or a disability are at higher risk of poor mental health than those with neither disability nor BIF, and it is vital that factors contributing to these differences are identified in order to reduce these mental health inequalities. 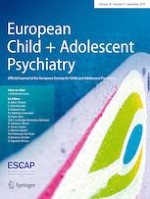 Genetic and environmental aetiologies of associations between dispositional mindfulness and ADHD traits: a population-based twin study

Association between weekday sleep duration and nonmedical use of prescription drug among adolescents: the role of academic performance

Fears and fear-related cognitions in children with selective mutism