A Web-based survey was conducted at two German universities, employing data from 1,707 students. Anxiety and depressive disorders were assessed with the 4-item Patient Health Questionnaire (PHQ-4), and structural conditions at the universities were also determined.

During the 2 weeks prior to the survey, 14.2 % of the students showed depressive and 16.3 % anxiety symptoms; symptoms of both disorders were experienced by 8.4 %. Gender differences and differences correlated with study year and field were found, but the effect size showed that these were not empirically relevant. Structural conditions, such as study demands, time latitude, social support by students, qualification potential and decision latitude, proved to be significant predictors for depression and accounted for 18 % of the total variance. Demands, time latitude and social support by students were proven to be significant predictors for anxiety, contributing to 16 % of the total variance.

These findings highlight the need to address mental health problems among university students and to initiate interventions. Furthermore, the findings implicate that study demands placed on students should be adjusted, and study resources, especially time latitude and social support by other students, should be promoted.
Anzeige 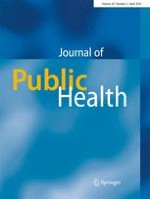 Cost and care models for acutely ill nursing home residents in Germany: the example of pneumonia

Public-private partnerships and efficiency in public procurement of primary healthcare infrastructure: a qualitative research in the NHS UK

Physical violence against Brazilian children and adolescents: a 4-year study