Skin pigmentation in human is a complex trait, which varies widely, both within and between human populations. The exact players governing the trait of skin pigmentation remain elusive till date. Various Genome Wide Association Studies (GWAS) have shown the association of different genomic variants with normal human skin pigmentation, often indicating genes with no direct implications in melanin biosynthesis or distribution. Little has been explained in terms of the functionality of the associated Single-Nucleotide Polymorphisms (SNPs) with respect to modulating the skin pigmentation phenotype. In the present study, which, to our knowledge, is the first of its kind, we tried to analyze and prioritize 519 non-coding SNPs and 24 3′UTR SNPs emerging from 14 different human skin pigmentation-related GWAS, primarily using several ENCODE-based web-tools like rSNPBase, RegulomeDB, HaploReg, etc., most of which incorporate experimentally validated evidences in their predictions. Using this comprehensive, in-silico, analytical approach, we successfully prioritized all the pigmentation-associated GWAS-SNPs and tried to annotate pigmentation-related functionality to them, which would pave the way for deeper understanding of the molecular basis of human skin pigmentation variations. 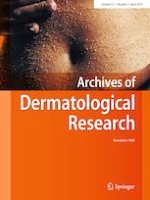 Atopic dermatitis and autoimmunity: the occurrence of autoantibodies and their association with disease severity

Determinants of disease severity among patients with atopic dermatitis: association with components of the atopic march

Activators of SIRT1 in wound repair: an animal model study