The aim was to conduct a meta-analysis of the randomized evidence to determine the relative merits of laparoscopic assisted (LADG) and open (ODG) distal gastrectomy for proven gastric cancer.

A search of the Medline, Embase, Science Citation Index, Current Contents, and PubMed databases identified all randomized clinical trials (RCTs) that compared LADG and OGD and were published in the English language between January 1990 and the end of June 2007. The meta-analysis was prepared in accordance with the Quality of Reporting of Meta-analyses (QUOROM) statement. The eight outcome variables analysed were operating time, blood loss, retrieval of lymph nodes, oral intake, hospital stay, postoperative complications, tumor recurrence, and mortality. Random effects meta-analyses were performed using odds ratios (OR) and weighted mean differences (WMD).

LADG was associated with a significantly reduced rate of intraoperative blood loss, at the expense of significantly longer operating time and significantly reduced lymph node retrieval compared to its open counterpart. Mortality and tumor recurrence rates were similar between the two groups. Furthermore, time to commencement of oral intake, postprocedural discharge from hospital, and perioperative complication rate, although not significantly different between the two groups, did suggest a positive trend toward LADG. Based on this meta-analysis, the authors cannot recommend the routine use of LADG over ODG for the treatment of distal gastric cancer. However, significant limitations exist in the interpretation of this data due to the limited number of published randomised control trials, the small sample sizes to date, and the limited duration of follow up. Further large multicentre randomized controlled trials are required to delineate significantly quantifiable differences between the two groups. 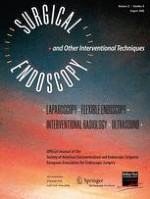 Fundoplication for gastroesophageal reflux and factors associated with the outcome 6 to 10 years after the operation: multivariate analysis of prognostic factors using the propensity score

Development of a navigation system for minimally invasive esophagectomy