The online version of this article (https://​doi.​org/​10.​1007/​s00592-019-01363-0) contains supplementary material, which is available to authorized users.
Haiyan Wang and Junwei Fang have contributed equally to this work.

GC-TOFMS spectra were acquired from vitreous and aqueous humor (AH) samples of patients with DR and non-diabetic participants. Comparative analysis was used to elucidate the distinct metabolites of DR. Metabolic pathway was employed to explicate the metabolic reprogramming pathways involved in DR. Logistic regression and receiver-operating characteristic analyses were carried out to select and validate the biomarker metabolites and establish a therapeutic model.

Comparative analysis showed a clear separation between disease and control groups. Eight differentiating metabolites from AH and 15 differentiating metabolites from vitreous were highlighted. Out of these 23 metabolites, 11 novel metabolites have not been detected previously. Pathway analysis identified nine pathways (three in AH and six in vitreous) as the major disturbed pathways associated with DR. The abnormal of gluconeogenesis, ascorbate–aldarate metabolism, valine–leucine–isoleucine biosynthesis, and arginine–proline metabolism might weigh the most in the development of DR. The AUC of the logistic regression model established by d-2,3-Dihydroxypropanoic acid, isocitric acid, fructose 6-phosphate, and l-Lactic acid in AH was 0.965. The AUC established by pyroglutamic acid and pyruvic acid in vitreous was 0.951.

These findings have expanded our understanding of identified metabolites and revealed for the first time some novel metabolites in DR. These results may provide useful information to explore the mechanism and may eventually allow the development of metabolic biomarkers for prognosis and novel therapeutic strategies for the management of DR. 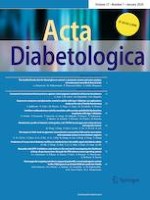 Depressive symptoms and glycaemic control in adults with type 1 diabetes: an exploratory study on the role of family functioning

Myopathy with DPP-4 inhibitors and statins in the real world: investigating the likelihood of drug–drug interactions through the FDA adverse event reporting system