The micro-lesion effect (MLE) has been observed in many Parkinson’s disease (PD) patients after deep brain stimulation (DBS) surgery. For subthalamic nucleus (STN) stimulation, the MLE has been reported as a predictor of the long-term efficacy of DBS. However, the research on the MLE in the globus pallidus internus (GPi) is insufficient. In this report, we conducted a study of the correlation between the MLE and improvement of GPi DBS.

From July 2014 to November 2015, 36 PD patients underwent GPi DBS in our hospital. The patients were evaluated before DBS and postoperatively at 24 h, 1 week, 2 weeks, 3 weeks, 6 months and 1 year. The evaluated items included the following: the UPDRSIII score with and without medication, off time per day and severe dyskinesia time per day. The dose of L-dopa, magnitude and duration of MLE were also recorded.

There were 32 patients with a postoperative MLE. In these 32 cases, the dose of L-dopa decreased from 960.5 ± 257.8 mg (range, 550–1550) to 910.4 ± 207.5 mg (range, 550–1250). There is a correlation between the magnitude of the MLE in UPDRSIII and the improvement degree of DBS at 6 and 12 months compared with the preoperative findings when off medication. The duration of the MLE is also an indication of the improvement of DBS in the long term when off medication. However, there was no correlation with on medication. Compared with the preoperative state, the UPDRSIII score, off time and severe dyskinesia time had improved postoperatively.

The MLE of GPi is a predictor of PD patients who would benefit from DBS in the long term. Medication may have some conflicting effects on the MLE. The exact mechanism of the MLE requires further exploration. 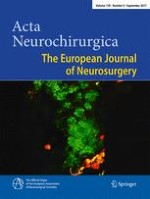 Regional differences in the incidence of aneurysmal subarachnoid haemorrhage in Finland