The objective of this study was to assess the microbiological effects and recolonization patterns after non-surgical periodontal treatment protocol based on the adjunctive use of erbium-doped yttrium aluminium garnet (Er:YAG) laser.

Results from 19 test and 21 control patients were compared. Minor changes were observed for total colony-forming units, with no differences between groups. For the frequency of detection, a limited and similar impact in both groups was observed for the most prevalent (over 80 %) periodontal pathogens (Porphyromonas gingivalis, Prevotella intermedia, Fusobacterium nucleatum). For proportions, reductions in P. gingivalis occurred at 3 months, both in the test and control groups (from 16.3 to 10 % and 16 to 14.8 %, respectively), although these differences were not statistically significant. At 12 months, the test group showed a statistically significant greater reduction in probing depth for the sampled sites.

The adjunctive use of Er:YAG laser when compared with conventional ultrasonic debridement did not provide a microbiological added benefit.

Even though some clinical benefits with the adjunctive laser application were identified when comparing both treatment protocols, there were no differences in microbiological outcomes or in the bacterial recolonization patterns. 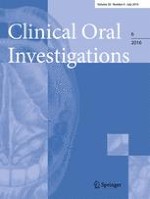 Effects of periodontal therapy on serum lipid profile and proinflammatory cytokines in patients with hyperlipidemia: a randomized controlled trial

The association between hypodontia and dental development