Helicobacter pylori is a major human pathogenic bacterium in the gastric mucosa, but to date the regulatory mechanism of the H. pylori-induced inflammatory response is not clear. MicroRNAs have recently emerged as key post-transcriptional regulators of gene expression. We have previously reported that miR-146a negatively regulates the H. pylori-induced inflammatory response, but its molecular mechanism is just beginning to be explored. Our aim was to further explore the key targets of miR-146a and its role of regulation in H. pylori infection.

The potential targets of miR-146a were screened through bioinformatic approaches and identified by luciferase reporter assays and green fluorescent protein (GFP) repression experiments. Overexpression and inhibition of miR-146a were used to examine the impacts of miR-146a on its target gene, determined by quantitative real-time polymerase chain reaction (PCR) and western blotting.

These results suggest that miR-146a may be involved in negatively regulating H. pylori-induced PTGS2 expression in human gastric epithelial cells. 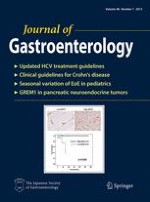 Reply to the letter by A. M. Bianco et al. regarding ‘‘Effects of family history on IBD characteristics in Japanese patients’’